After several days of rain and snow, Humboldt county started to slip and slide.
This is a time line of the Briceland Road at Whittemore Grove closure, most of this content has been pulled from Kym Kemp’s blog and off locals Facebook profiles.
This is pre-Facebook SoHum Awareness, but shows how the Facebook page came into being. 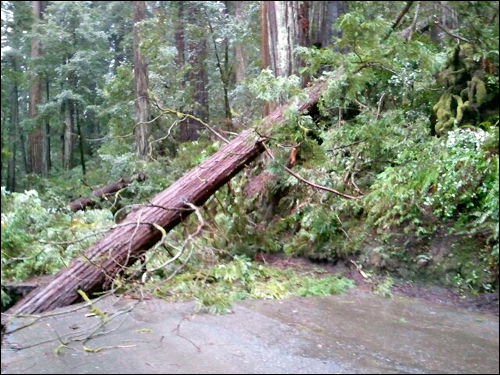 KMUD reports that there are several trees down and half the road base lost. Maybe be open in 4 or 5 hours, with one way controlled traffic. Also there is an accident on Old Briceland Road.

Later in the day:

These are photos of the county road towards Shelter Cove just outside of Whittemore Grove. Briceland Road is open only to one way traffic and looks like it will be that way for some time.

Kim Sallaway who took these great photos says, “I suspect Briceland Road drivers will have to deal with this slide in Whittemore Grove for a long time.

If it lasts until they get to the repairs. It is really undercut and the creek is high and mighty. Other trees are in danger of falling at the same location. This is pretty bad.”

“The logs at the top are alongside the west bound lane. The redwood is the one standing on the other side of the roadway. Between them lies 1 lane of traffic and a heck of an undercut. The pavement is suspended in the air. I got off it after I realized it had no support at all and the drop is straight down. It would be worst case scenario for me instantly. This place is really dangerous right now.”

More Photos:
KMUD has a photo stream on Flickr of photos from 18 March to 28 March 2011…
KMUD News photos.