Many thanks to the crew who are working in cold, wet, dangerous conditions so that the road will be opened. Kim Sallaway commented, “The roadway is being worked on with the hopes that by Monday the traffic can use it, one way, controlled. The crew worked until 11:30 last night (Saturday) and started up again at 7AM (Sunday). They dumped more than 40 20 yard dump trucks worth of rip-rap into the hillside yesterday. They have done more than 15 today by 10:30 AM. They have a steady flow of big serpentine rocks coming from Bear Butte. According to the job supervisor, I can’t recollect his name, the plan is to work until it is done. And he hopes that will be tonight. This incessant rain makes the going uncomfortable for the working men, but they seem to be getting it done. The road will be one lane.”

At this point in time news and mis-information was coming from all directions. There was radio, KMUD and KHUM, blogs, Facebook pages by many people, everyone trying to get the most accurate and up to the minute info. Such as, “Would school buses be able to cross the repaired one lane in Whittemore Grove?”

It was hard to know who to listen too, I (bobbi) personally was frustrated going to several websites and listening to several radio stations for up to the minute news. It was obvious that Kym Kemp had been doing the best job at keeping the community informed.

It was at this point I emailed Kym, and asked if she thought a Facebook page to gather all the info in one place was a good idea, she said yes, and so I made the decision rather quickly to put up such a page. I called it SoHum Awareness. It grew quickly. It became the place to ask questions and get answers.

To really see how effective it was you need to scroll backwards to the beginning and follow the threads forward. A lot of information was received and put out. Because I created the Facebook page as open to the public, anyone could see it, and by ‘liking’ the page anyone could post questions or answers.

At that point it became a community powered page with Kym Kemp, Estelle Fennell and myself, Bobbi Wisby, verifying info and keeping the page on focus.

This is an area where Facebook shines, as it allows everyone into the discussion. And with the help of friends and neighbors the community rallied around this new SoHum Awareness page.

As it would be way to time consuming to transfer all those threads and comments to this website, if you want to see it in action you will just need to go to Facebook. You don’t have to sign up for Facebook to read the postings, only if you want to interact with the page.

March 27 at 12:08pm
SoHum Awareness
Please come to this page when you have info regarding any emergency situations. If it’s been posted already suggest it to your friends or copy info you don’t have and paste it as a status on your page. But remember, we’re trying to make it so you don’t have to look all over the place to find info.
Harry Vaughn: 8:00AM per Marty Messenger – they are doing some work on pot holes to make the drive easier on Old Briceland Road and he put up more signage in Redway re closure. Road is closed and escorts will be provided via Old Briceland rd.
SoHum Awareness
Thanks, Harry. Just heard that they may be able to have some partial opening at Whittemore by the end of the day. I’ve got a friend checking it out right now. ~ Estelle
Harry Vaughn: The above information was posted on a CHP site. Everyone is doing the best they can with the situation we are all facing. The CHP, County Roads and State Parks. I am grateful for their efforts. Medical emergencies. My thoughts on that are medivac flights, Beginnings and other Volunteer Fire Departments and like we had to do in 1986 when Salmon Creek Road slid out and we had a medical emergency at a neighbors house, we improvised a litter and hand transported the injured party across the muddy slide to a waiting ambulance on the other side….this community is as strong as the people that make it strong. That’s pretty strong and resilient, is it not?
March 27 at 12:26pm

This type of community commentary went on throughout the day, as Briceland Road was being repaired, and Old Briceland road was being used as an access road to town.

By the end of the day, Briceland Road was open! 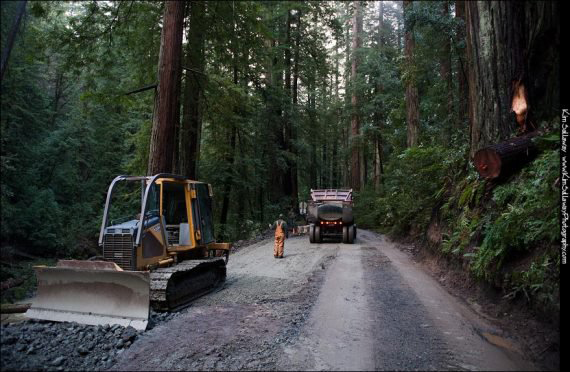 Monday 28 March 2011
Briceland Road through the Grove is now open. School Buses will be running on schedule.
Weight restrictions are still in place.

SoHum Awareness Facebook page was a hit! A great community service and we had over 350 ‘friends’ in 24 hours! The page continues to grow. We have a Twitter feed, @SohumAwareness where any one with a Twitter account can get the feed.