Posted on Wednesday 6 April 2011 by bobbi 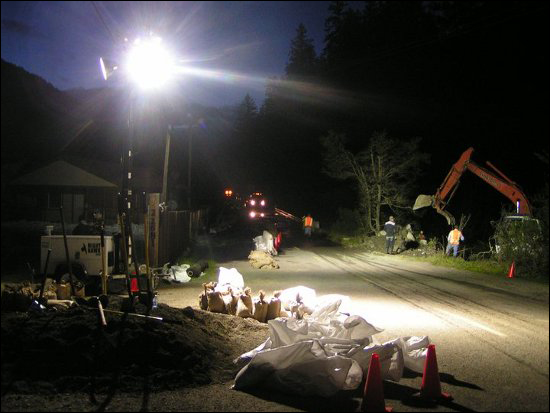 Crews work all night and into the day to save home and bridge at Dobbyn Creek. Photo - Natasha Carrico.

The striking photograph above by Natasha Carrico shows crews from GE Construction working through the night to divert water from where a massive slide has rerouted it. The slide, which supervisor Clif Clendenen called “twice the size of the Sylvandale Slide” [which closed Highway 101 for 5 days] has dammed Dobbyn Creek. The rains from last month and the melting heavy snowpack from the Watts Lake/Kettenpom area where the headwaters of the creek are found are creating a huge flow of water which the slide is diverting into a home and the nearby County bridge abutments.

In the photos seen in the slide show on SoHum Awareness taken by Shawn Studebaker, the slide can be seen having crossed the creek. There, the water is backing up. It would have already poured into the new home of a young family with children except for the efforts of over 40 volunteers who placed over 3000 sandbags. Some of them wading up to their waists in ice cold water.

“We are appreciative of the help and we hope to divert the water using culverts, says Diana Totten. “There is no real fix but we hope to take the pressure off. Right now, the water is two feet deep on the County Road. We plan to take culverts over the existing road.” Then build a new road over them.

The situation is tense and dangerous. This is an active slide. It is still moving and unfortunately, the water is also moving so fast and forcefully that it is washing the sand from the bags away in a period of three to four hours. According to Totten, “During the night lots of trees fell. It was intense. As they fell, they made a horrible cracking sound. Then a splash.” Then, she said, a “two foot tidal wave” would roll down the creek and start “hitting around us.” This she said, “…made it a little too exciting…”

Until yesterday, there had been little county help except from the county crew workers. It was up to the landowner to protect their own home. Totten, with an extensive background in firefighting, found this incomprehensible. “If it was a forest fire, we would have had tankers and helicopters to save the house.” Now though with the help of Public Works director Tom Mattson and County Supervisor Clif Clendenen, the county supervisors have stepped up. They have hired a contractor GE Construction, according to Public Works, but locals call them Coleman Construction. They live nearby and had equipment only two miles away ready to be mobed in.

K-rail (cement barriers) have been brought in to replace the sandbags.

Just as in the situation near Fish Creek, the homes owners are a well known and liked. Totten calls them “the most gracious and wonderful family.” Hopefully, with the help of generous volunteers, help from the county, and the local contractor this situation will be resolved. The hope is that the water which is threatening the structures can be diverted so that the slide can slowly erode away. Because the slide is still moving and because structures could be damaged if the dam were to collapse all at once, the work on the earth blocking the creek is minimal.

Water continues to spill over the bridge, but Coleman Construction and the county road crew work to put in three culvert pipes to divert the water and reopen the road.

Mikal Jakubal on SoHum Awareness
Just got back from Dobbyn Creek. County guys are saying they hope to have the road open tonight sometime. By the looks of the progress, it seems like they will. Three big culverts were put on top of the roadway and an hour ago they were in the process of burying them in truckload after truckload of roadbase material.
The house is safe for now. The only problem will come if the slide keeps moving and blocks the creek beyond what the culverts can handle.
The best way to visualize the size of the slide is by comparing it to the Redwood Drive slide just north of Redway that happened about this time in ’95. This one has likewise created a new canyon high up the mountain where it started. It’s impossible to gauge by the photos. You’ve got to see it. April 6 at 5:25pm

SoHum Awareness:
Dobbyn Creek Road (Alderpoint Road) is now open 1 lane. The work done today has “taken a lot of danger from the home and the road and the bridge,” says Diana Totten. There will be workers there 24 hours a day until the danger abates further though.
April 6 at 7:37pm

Mikal Jakubal on SoHum Awareness
These are the new culverts. 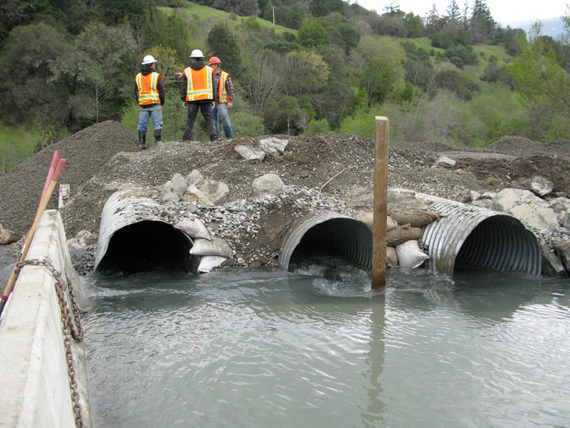 Mikal Jakubal on SoHum Awareness
Next photo will be an overview of the site with an explanation of the work. The existing roadway is under them and runs perpendicular (left-to right). April 6 at 9:21pm
Another view of the culverts, looking down the bridge where much of the water is still pouring off.
It’s somewhat hard to grasp what is happening here from a photo, but this is what it looked like at about 4pm today.
The creek normally runs well to the left of and behind the house. The slides is from the far left and pushed the creek to the right and up and over the road where you can see it running. The sandbags are pushing the water away from the house and down the road. The culverts are actually sitting on top of the roadway, perpendicular to it, with bags and K-rails pushing the water toward them.
By the time I’d left, more K-rails and bags were in place, pushing more of the water into the culverts, where it drained into a creek channel across the road that eventually runs under the bridge.
In this photo, about half the water is going through the culverts and half down the road to the bridge, where it falls off the left side. The culverts have now been completely buried in roadbase material so they can be driven over and I’d guess that more of the water has been diverted through them. The whole thing is a crazy bit of engineering.
By the way, the creek is backed up a full half mile.
April 6 at 9:16pm 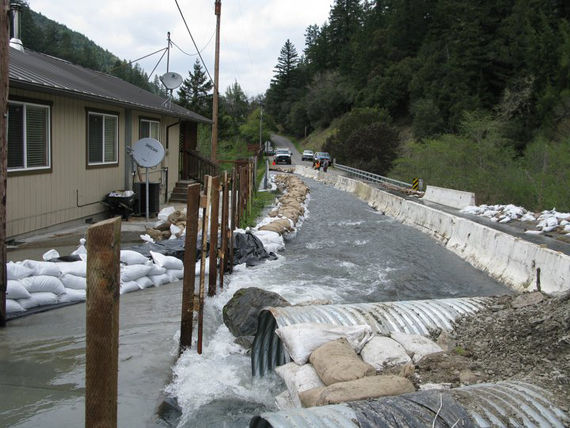 Mikal Jakubal on SoHum Awareness
Disaster humor—fishing poles on the sandbag pile protecting the house. I really didn’t take many photos. Mostly concentrated on video. Processing that now.
Just got a phone call from someone who said that he’d been told that the fishing poles were part of some attempt to measure if the bottom were rising up. Can’t quite picture how you’d measure that way.
April 6 at 9:27pm 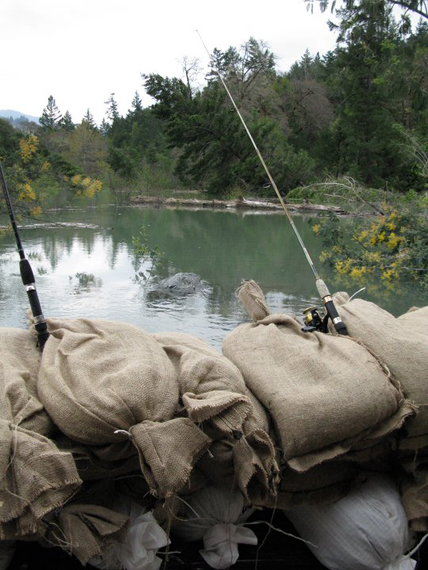 And the Times Standard has an article.