**Updated**
SoHum Awareness:
Spanish Flat Fire is at 150 acres. Fire is in steep terrain in the Spanish Flat area south of Punta Gorda. It is burning in grassland and is slowing down as it reaches heavier brush. According to CalFire, potential for growth is limited by current conditions. Resources committed to the fire at this point include: 8 Fire Crews, 6 Engines and a Helicopter. Access to the fire is from the Petrolia area via the Smith Etter Road. There is no current estimated time of containment. Firefighter are hoping to determine that later today as they get a better look at the fire scene. Cause is unknown at this time – Estelle
Saturday, July 2, 2011 at 9:31am

Utpara Deva: That’s interesting, I woke up smelling the smoke from a fire at my place on a ridgetop looking west on Dutyville Road. I can see the King range across the Mattole valley from here. No visible heavy smoke plume coming over the mountains at this time, just a slight haze.
Saturday, July 2, 2011 at 9:48am

Autumn Murphy Hargrave: we have a direct line of site on the fire. it grew very fast last night but seems to have slowed down greatly.
Saturday, July 2, 2011 at 10:12am

Taun Moondy: so that is what the helicopters were doing~saw one coming back to the con camp with a bucket.
Saturday July 11, 2011 11:11am

SoHum Awareness: Cal Fire is now Calling this the Spanish Fire. They are putting it at 150 acres and saying it is 50% contained. Spanish Fire ~Kym
Saturday July 11, 2011 11:11am 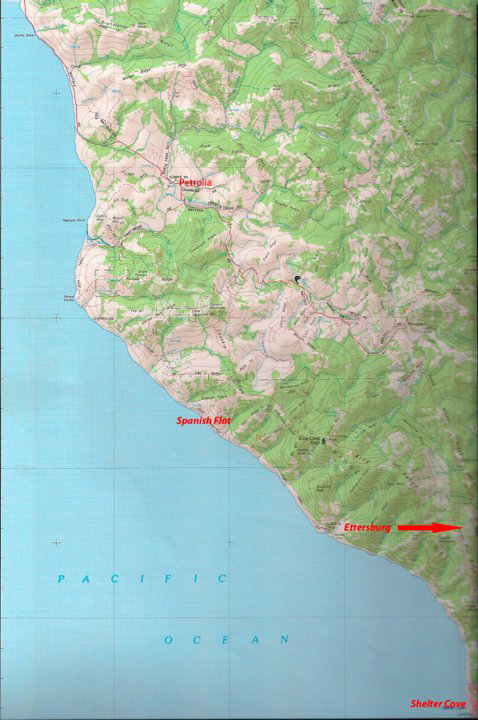 CAL FIRE NEWS RELEASE
Humboldt-Del NorteUnit
California Department of Forestry and Fire Protection
DATE:
July 2, 2011
Spanish Wildland Fire Incident
Fortuna – On the evening of July 1st, 2011 a report of a wildland fire burning within the Spanish Flat area of the King Range National Conservation Area was received by the CAL FIRE Humboldt – Del Norte Unit. A wildland fire response was initiated which consisted of a battalion chief, Bureau of Land Management chief officer and law enforcement rangers, fire engines and hand crews from CAL FIRE. Additional support was provided by fire engines and personnel from the Honeydew and Petrolia Volunteer Fire Departments. The fire is located in a wilderness area and is not accessible by vehicle. The fire has burned approximately 150 acres of grass with minimal involvement of timberlands, and the fire is currently 50% contained. No estimation of full containment. The cause of the fire is currently under investigation.

Firefighting operations will continue over the next few days and CAL FIRE asks the public to stay away from the area due to hazards associated with fire.