North Coast Cal Fire Gearing Up for a Dangerous Year

reprinted with permission from KymKemp.com 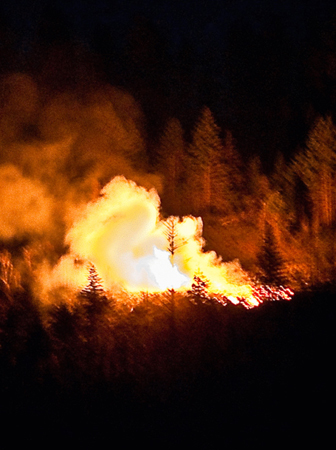 “We are monitoring conditions and preparing for a very active summer,” explained Cal Fire Battalion Chief Jeremy Monroe. He says that his agency samples different vegetation components and the results are worrisome. “We’ve been seeing fuel moisture…like in 2008, the year we had the late June lightning fire.“ That year nearly a thousand fires swept California in a few short days. Monroe says, “The conditions in the wildlands are similar [to then].”

According to Jeff Tonkin of the US National Weather Service, rainfall in Eureka is at 82% of normal and similar numbers are in other areas across the region. Furthermore, he says, “The bulk of the precipitation fell in December. The earlier part of the winter was when we got most of the water.” He adds that we’ve had a somewhat dry spring and this will cause the North Coast region to be even more prone to fire danger than just having lower rainfall. Later rains can help ameliorate the issues but the last few months have been unusually dry.

Cal Fire’s Monroe says that unlike Southern California where, according to Robert Jablon of the Associated Press, “..fire crews have responded to more than 680 wildfires since the beginning of the year — some 200 more than average for the period,” our region has seen about the normal amount of fires so far.

On the other hand he says that on April 24th, the day that broke heat records in McKinleyville and Eureka, Cal Fire responded to unusually high number of fires. “The first incident we had…was up in West Haven. It was a 1/2 acre—human caused.” He adds that it was “well accessible and resources were able to knock it out quickly.” Then, he says, there was one near Miranda—a kiln started up and some sparks started a fire. “Then our helicopter was returning from a training mission and saw two fires on the Yurok reservation. These were both related —human caused and still under investigation. He adds, “If the weather continues as its been, the grasses will dry and we’ll see potentially more fire activity.”

That day, he says, “was an anomaly. It was a warm day. [But] if it gets hotter and warmer and dryer, the possibility of ignition is greater.”

According to the California Department of Forestry and Fire Protection, fire crews in the Southern part of the state are already increased staffing in response to the perceived danger. Monroe says, “They staff sooner because they are in the southwest. They have a lot more grass and brush.” However, he says, “We’re trying to get resources up and running—bringing everything up two weeks earlier then what was planned. This could change. If they have a lot of activity is Southern California, this might cause us to bring our staffing up [even] earlier. We’ll be bringing personnel and equipment on….Our dozers will be staffed seven days a week. The helicopter will be staffed full time. All the seasonal staff—the firefighters—we’ll get them trained.”

The answer to this situation is not fear but preparation, says Monroe. “For us, the message that we like to get out to the public is our Ready Set Go program. For anyone who lives in the wildlands, go to www.fire.ca.gov . This site gives ideas and tips on how to prepare yourself and your home… .”

In addition, Monroe notes, “We can’t control natural fires but human caused fires we can.”

He says, “This is not appearing to be a normal year. It could change but it could be really active or it could fizzle out. ” He notes that that what started the 2008 fires mostly were lightning strikes and “We can’t predict what the weather will do throughout the summer…The lightning is a variable that you can’t predict.” He adds ruefully, “The rule I always tell people is I’ll tell you in November… Seriously I’ve been this around 26 years now but the biggest variable is the weather and you can’t predict…that well long term.”