From Kym Kemp’s blog:
Kim Sallaway took these amazing shots today of Briceland Road at Whittemore Grove. The slipout there is affecting residents of Briceland, Whitethorn, Shelter Cove and other points west of Redway. Last night (Friday) the road was closed from 7pm til almost 8am this morning according to residents who live near there. Drivers were rerouted over the narrow Old Briceland Rd pass the airport and winding out to Briceland itself. Today, crews are putting riprap (in this case huge boulders) in, dealing with the log jam, and shoring up the road. Reports from KMUD say, “State Parks working on Briceland Rd thru Whittemore Grove now, says they won’t close road. again, putting up lights.”

According to commentor Longwind, “The flagger I chatted with this morning said (State) Parks had emergency funding for jobs like this so it’ll get done expeditiously–but they didn’t have enough working radios yet, etc. It’s definitely a scramble right now. They’re digging out mud bank and dumping in riprap now.” Hopefully, traffic will be back to normal soon. 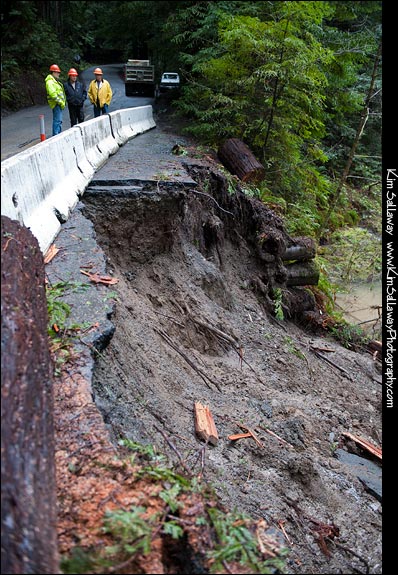 Briceland Road has been closed. Redway resident and photographer, Kim Sallaway, took these this evening after the roadway collapsed further. He said, “The road is gone. The crew is dumping riprap into the oozing mud. They disappear with a plop and sink into the moving mess. Truck load after truck load of rocks from a quarry on Bear Butte are disappearing into the hillside and creek bed as they try to get the earth to stop moving. This is serious stuff. The road is closed. There is no road. They hope to rebuild one lane by early in the week for controlled traffic. The repair will take more than a year. It will be very inconvenient.”

The alternative route now is through Old Briceland Road out by the Garberville Airport. Sallaway urges, “Right now, if you don’t need to go to town, don’t go. If you have to drive Old Briceland Road, remember it is dangerous, and will have far more traffic on it than is normal. BE CAREFUL. Put your cell phones away. Pay attention.”

The bed of the Briceland Road at Whittemore Grove was built on an old redwood crib. According to Sallaway, “The logs are too old and are decayed. Touch’ em and they have no integrity at all…the crib failed.”

UPDATE: According to Mark Lovelace, “[Humboldt County’s Public Works Director, Tom Mattson] has requested that the Sheriff declare a disaster to help expedite repairs.” Briceland Road has been closed. Old Briceland Rd is having trouble dealing with the increased traffic during such rainy weather. Delivery trucks and school buses as well as emergency vehicles and regular drivers are all being affected by this closure. Trinity and Mendocino have already declared disasters.

This is where things were at when I went to bed on Saturday night.