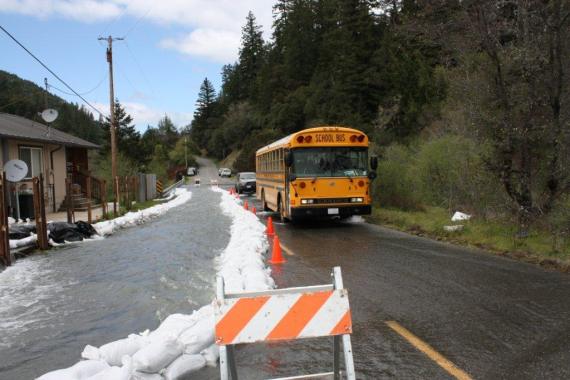 “The upper part of the slide has created a huge 200 foot bluff–sheer mud and rock bluff,” Diana Totten a consultant with Coleman Brothers Construction says. “The slide is still moving…how fast is hard to determine….We can’t get over there without a boat.” The lake that has formed has kept most people from accessing the massive slide that several people have claimed is twice as large as the Highway 101 slide. The excavator operator that is paid by the most affected homeowner did lower the boom on his machine and inch his way across the creek to check out the area. According to Totten, he said that there was “a crust on top, but underneath is basically liquefied. The ground was springy to walk on.”

The accumulating mud could eventually slide across the entire creek and create a lot larger dam upstream. “There could be a time when it completely stops the creek,” Totten says. But more than the possible dam, the homeowners are concerned that as things slow down less attention will be paid to the situation. When people are in trouble, everyone helps but they move on and the homeowners, both here in Dobbyn’s Creek and in areas affected by the slides, will have to be paying both money and attention for years.

The photo above was taken in the first few days of the Dobbyn’s Creek crisis. Officials released school early that day as crews were worried about the safety of the road. Eventually water completely covered those sand bags shown and 2000 more bags were added. Many hand-filled by volunteers. The bags themselves were donated by a Blocksburg resident who uses them for an earthworm casting business. Neighbors are pitching in now fully aware that it is how we respond to people in need that defines us as a community and as individuals.

Remember that there are still others affected in our area including Kris Wallan and there are multiple road outages. We need community help for them, too. And we need government funds. Let us show everybody how SoHum pulls together to help our neighbors. Sending in photos of damage in your area to SoHum Awareness or to me — Mskymkemp@gmail.com will help us bring attention to the seriousness of the calamity and will help us get help for those who are most seriously affected.

A fund has been opened at the Community Credit Union in Garberville for the Dobbyns Creek Rescue Crew if others want to donate. I intend to donate tomorrow. Even if you only have twenty or so dollars to give, it only takes 100 people to make a tidy sum which can help a lot. I hope I meet you there and shake your hand.