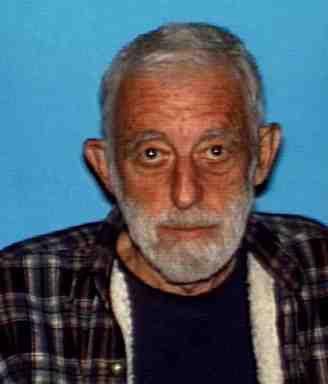 An elderly man, Robert Firestone, is missing from a care home in Garberville. The Sheriff’s office received a report at 11 this morning.

According to local resident Sandra Bonham, “At 5:30 this evening, there were numerous Sheriff vehicles including a large van and some mounted on horse staged down at the Renner fueling station in Garberville. Also there were 2 Fish and Game men with a dog unloading at Criss’s [Flower Shop.]”

The Humboldt CO. Sheriff’s Office sent out the following Bulletin:

On 04-26-2011, at 11:00 am the Humboldt County Sheriffs Office received a report of a missing elderly male. The reporting party was a caretaker at a local care home in the Garberville Area. The reporting person told responding deputies that 82 year old, Robert Firestone, a resident at the home located in the 900 block of Locust Avenue, Garberville, was missing. He was last seen on 04-25-2011 at 7:00 p.m. in his bed asleep. He likes to walk three times a day and it is unknown exactly when he left the care home.

According to the reporting party Firestone is deaf, and has Alzheimer’s. When Firestone walks, he walks stooped over due to a medical condition. He is also supposed to be taking medications.

Humboldt County Sheriff Search and Rescue personnel have been called to the area to assist in the search.

Robert Firestone is described as:
White Male, 5 feet, 8 inches tall, 125 lbs, gray hair, brown eyes. He may possibly be wearing a long gray raincoat, and a white round fishing cap.

Anyone with information as to his whereabouts is requested to contact the Sheriff’s office immediately.

SoHum Awareness: Tammy Diffin Harrison: Mr. Firestone did not live in a care facility, he still lived on his own. He also could hear to a certain degree! Hope he’s found and that he’s ok.
April 26 at 6:35pm

SoHum Awareness: Kim Cabrera: The sheriffs were out along Redwood Drive when I came home this evening. Lots of trucks parked along the road after the bluffs too. Were they looking for him? I sure hope he’s not in the river. 🙁
April 26 at 9:10pm