Construction on 101 Slide Near Redway Results in Traffic Delays 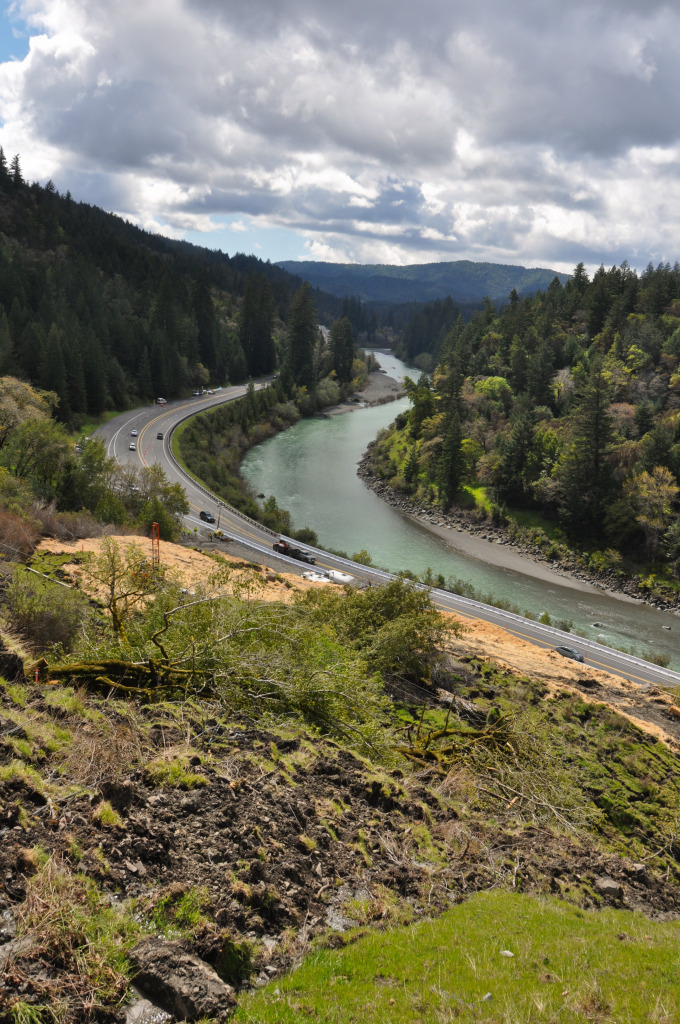 Traffic between Redway and Phillipsville will be delayed throughout this week as construction workers continue to remove debris from the giant slide that engulfed Highway 101 last Spring. One way controlled traffic at various locations along the slide between the hours of 6 am and 6 pm throughout this week will cause delays of up to 10 minutes. If it is possible to avoid the area during that time, you’ll save yourself some frustration.
~ from kymkemp.com

UPDATE: Caltrans not working on the slide tomorrow during the day. They’ll work overnight.

More details:
Today’s traffic at the slide which was projected to have only delays of 10 minutes escalated into a nightmare for drivers. In an effort to control the situation, construction will only happen at night. According to Julie East, Caltrans’ spoke person,

Crews are installing two drainage crossings for which they needed to use one-way traffic control with a pilot car. We were anticipating 10-minute delays with that work, but those delays were somewhat longer due to higher-than-expected traffic volumes. To reduce impacts to the traveling public, there has been a change of plans for tomorrow’s work and we won’t start until 7PM and should be finished by 5AM Wednesday morning. Then it will be back to one lane open in each direction.

The road is projected to be back to four lanes by winter.

SoHum Awareness:
Sally Then: I love SoHum Awareness!
August 15 at 3:48pm
Sarah Beresford: We came threw @ bout 10am it was about a 15 minute wait!
August 15 at 4:32pm
Leona Terry: Wish I had seen this post before heading to Garberville. An hour delay going there & 30 minute delay coming back. Normal travel time is 15 minutes each way
August 15 at 4:55pm
Pamela K. Allee: I had people complain that they waited 45 mins. to an hour but they are working on the Avenue from p-ville to the freeway then freeway to Redway
August 15 at 5:02pm
SoHum Awareness: thanks for the heads up Kym..~bobbi
August 15 at 5:13pm
Burt Codispoti: We just waited about half an hour, heading south around 3:10 pm. Southbound seemed to have longer delays than northbound. August 15 at 5:14pm
SoHum Awareness: I just put up a new post with new info. Traffic was so bad today that construction will run all night tomorrow. So, summary…travel during the day: good. Travel after 7: bad.
August 15 at 6:41pm
Myrna Hollis Kemp: We were in the line up headed south from 3:10 – 3:35. Not as long as some but long enough. Came back from Garberville abut 5:00 and southbound was moving fine and northbound was moving but very slowly. An inconvenience but, being a CalTrans wife, I understand that sometimes the road just has to be closed to fix the problem.
August 15 at 10:41pm

This entry was posted in Roads and tagged 101, CalTrans, Kym Kemp, photos, slide. Bookmark the permalink.